All 66 books of the Bible have been covered by John Schultz: An accomplishment of a life time, matched by only a few saints in history. Make your choice below and download the PDF Commentary eBook for free.

Copyright (c) John Schultz. All Rights Reserved.
Permission is given to view the material on the www.bible-commentaries.com web pages and save that material only for your future personal non-commercial reference. Do not further copy, modify, use or distribute the material in any way unless you obtain the permission of John Schultz. We are unable to routinely inspect or confirm the material contained on the web pages that are linked to this page are correct in every case. We provide the information on these web pages as is and without any warranties. We disclaim all express and implied warranties, including merchantibility and fitness for a particular purpose. In no event will will be liable for any loss of profits, business, use, or data or for indirect, special, accidental or consequential damages of any kind whether based in contract, negligence or other tort. We may make changes to the web site materials and the product information and prices at any time without notice and without obligation to update the materials contained on these pages.

John and Janine Schultz John and Janine Schultz have spent 37 fruitful years in Irian Jaya. The students who have attended their classes through the years, who are now pastors and church leaders throughout Irian, deeply respect them as spiritual mentors. John's unique sense of humor and amazing facility in many languages have made him a popular preacher. Janine's quiet, loving support has been a beautiful complement to their ministry.

John was born in Haarlem, The Netherlands, where he found Christ while he was a high school student, later feeling God's call to full-time ministry. At the Brussels Bible Institute in Belgium God directed John to Dutch New Guinea under the Alliance. The Alliance Missionary Committee in The Netherlands was reluctant to send John because he was single. This "minor problem" was solved when John proposed to Janine, a young girl from the French speaking part of Belgium. They were married shortly after graduation and spent their honeymoon on a Dutch freighter with first class accommodations, at expenses paid by the Christian and Missionary Alliance (C&MA). Says Janine about this romantic interlude, "What a way to go!"

Janine was born to Christian parents and accepted Christ as a young girl. While attending Brussels Bible Institute, she stayed with an American missionary family on their way to Africa with the C&MA. This was her first contact with the Alliance. At a missionary meeting, following much hesitation and struggle, she told the Lord she would go anywhere He wanted her to go. So when John asked, "Would you like to go with me to New Guinea?" her heart was prepared with a positive response.

When the Schultzes arrived at Obano in the Wissel Lakes in the heart of Irian Jaya, Indonesia, Janine was initially shocked by the primitive, odiferous Papua tribespeople and wondered if she could ever love them. She and John are both outstanding in their loving attitude toward the people of Irian, so God gave her the love she needed in abundance.

The Kapauku (Ekari) language was the first challenge John and Janine had to conquer. For Janine it was doubly difficult because she was learning English at the same time! Soon John was also given the responsibility of overseeing the Alliance Elementary School program, which was subsidized by the Dutch government. He also filled in as a teacher at the Continuation School in Tigi, grades four through six. At the same time he did district work in the Lake Tigi area. lt was a sink or swim situation and, by the grace of God and the support of his wonderful wife, John did not sink! For the last year of their first term, John and Janine moved back to Enarotali to teach in the Kapauku language Bible School. After furlough they taught in the same Bible School, now located at Kebo, where they worked for several years with Walter and Viola Post, the first missionaries to the interior of Irian Jaya.

Since no medical work was being done in Kebo at that time, they began to give out medicine, learning to give injections and treat injuries. Though they had no formal training, they learned by doing, often consulting a mission doctor via the short wave radio. Most of the people who came were helped, and nobody died! The years in Kebo became the best of their lives, even though they had to evacuate twice because of political unrest in the area.

After an extended furlough because of a severe medical problem of one of their children, they returned to Irian Jaya and at the request of the church they started the Theological School in Nabire. The Lord evidently gave His approval to this new project, since He provided the money to develop the campus and the personnel to teach. The Walter Post Theological School is now completely under Indonesian leadership. John and Janine can look back over years of blessing in that second phase of their ministry.

Their three oldest children, Ruthy, John Paul and Mitch, were born during their first term, with Viviane joining the family after their first furlough. All their children are following the Lord and serving Him in different ways. Ruthy and husband Tim Hall, a so-called missionary kid (MK) from Cambodia, are pastoring a C&MA church in south Georgia. John Paul (J.P.) and wife Judy (Harvey), an MK from Africa, are house parenting in the Dalat School in Malaysia. Mitch and his wife Elaine served under the C&MA in England and today run a ministry supporting Pastors and Missionaries. The Schultzes are the proud grandparents of twelve very special grandchildren.

In addition to their dedicated ministries to their students and to the national church, John and Janine's home is always open to fellow missionaries traveling through Nabire. Their servant hearts have been a blessing and challenge to all, and their warm hospitality will be greatly missed. They will leave a large part of themselves which has been invested in many lives in their adopted land of Irian Jaya.

Ekari
Children in the Paniai region 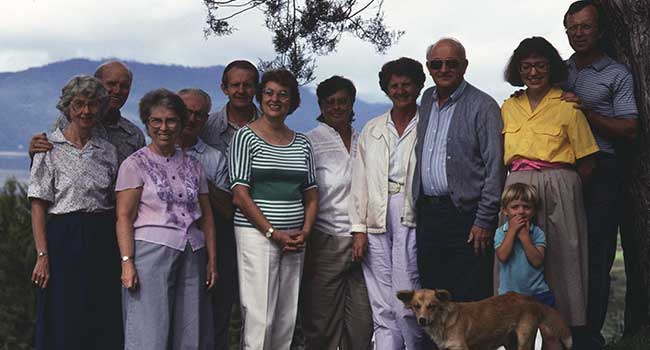 A rare group gathering (1991)
Missionaries mostly stayed on location. Here John and Janine (3d/4th from R) were joined by other C&MA missionaries on a special event 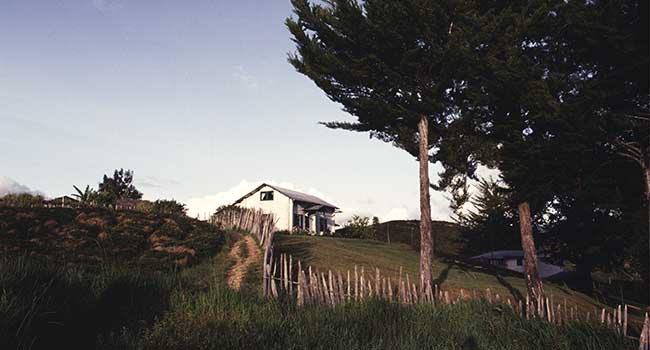 A typical home
The typical humble dwelling of C&MA Missionaries, build by hand from hardwood 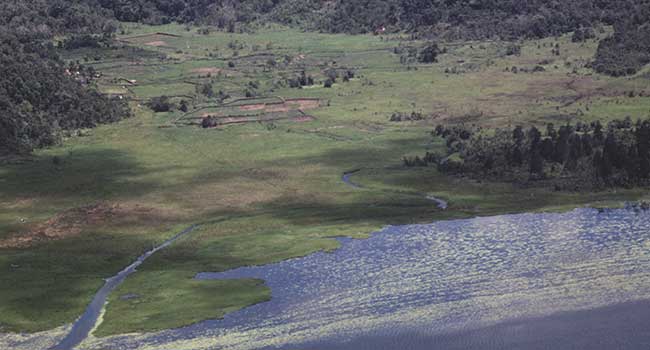 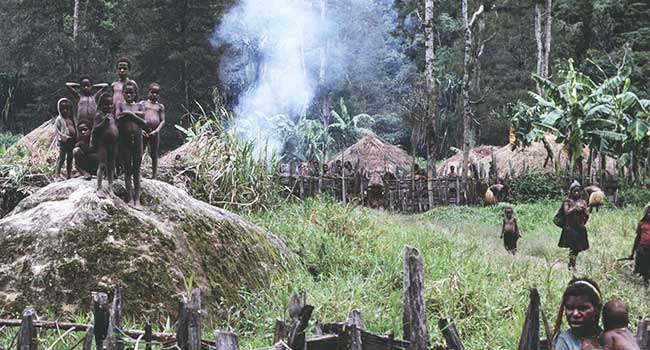 Dani
A small Dani village in the heart of Papua 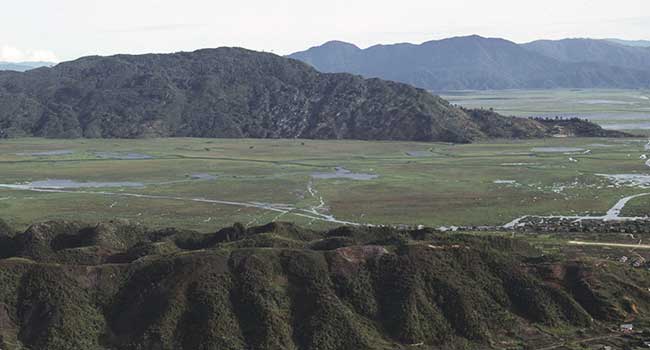 Lake Paniai
The swampy grounds at 6,000 ft surrounding the lakes in the Paniai highlands

This short video features the overwhelmingly beautiful and equally profound description of our King. As John and Janine Schultz served Christ so faithfully, we complete this web page with these words of Rev. Lockridge.

Tip: Use the YouTube controls to select Full Screen.

He’s the greatest phenomenon that ever crossed the horizon of this world. He’s God’s Son…. He’s a sinner’s Saviour…. He’s the centerpiece of civilization…. He stands in the solitude of Himself…. He’s august…. He’s unique… .He’s unparalleled…. He’s unprecedented…. He’s the loftiest idea in literature…. He’s the highest personality in philosophy…. He’s the supreme problem in higher criticism…. He’s the fundamental doctrine of true theology…. He’s the cardinal necessity for spiritual religion…. He’s the miracle of the age…. He’s the superlative of everything good that you choose to call Him…. He’s the only one qualified to be an all sufficient Saviour…… I wonder if you know Him today?

He supplies strength for the weak…. He’s available for the tempted and the tried…. He sympathizes and He saves….He strengthens and sustains…. He guards and He guides…. He heals the sick…. He cleanses lepers…. He forgives sinners…. He discharges debtors…. He delivers captives…. He defends the feeble…. He blesses the young…. He serves the unfortunate…. He regards the aged…. He rewards the diligent…. and He beautifies the meek……. I wonder if you know Him?

Well…. His office is manifold…. His promise is sure…. His light is matchless…. His goodness is limitless…. His mercy is everlasting…. His love never changes…. His word is enough…. His grace is sufficient…. His reign is righteous…. and His yoke is easy, and his burden is light. I wish I could describe Him to you, but He’s indescribable…. He’s incomprehensible…. He’s invincible…. He’s irresistible.

Note: We have been unable to determine whether or not this material is copyright protected. We share it in ‘good faith’. If you believe us to be in error, please do contact us via the prayer request form on this page.